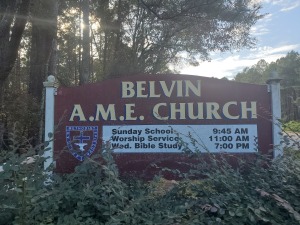 The Funeral Services will be held on the Belvin Family Farm lawn on Saturday, November 14. 2020 at 12 noon. This is located right beside the Shade Arnold Baptist Church in Montezuma, Georgia.  Mrs. Belvin has resided at this location the past 43 years. Everyone in attendance is REQUIRED to wear a mask and MUST practice social distancing.

God, in His infinite wisdom and divine mercy, has called from our midst our beloved, wife, mother, daughter, sister, aunt, cousin, teacher, and friend, Mary Alice Johnson Belvin.  Sorrow comes and goes, just as surely as the joys of this life.  We can never amply prepare ourselves for the inevitable occasion.  So it is with our beloved Mary Alice, by the life she lived, she so freely and unconditionally touched the lives of many.

So today, we pause to honor and celebrate the homegoing of “Mary Alice” “Mae Alice”, “Mae” and “Mae Sue” so affectionately known, who was born April 7, 1937 in Macon County, Georgia.  She is the “baby girl” of the late Mr. Willie H. Johnson, Sr. and Mrs. Bertha Clarington Johnson.

Mary Alice accepted Christ during her childhood and served as an active and faithful member of Belvin AME Church in Marshallville, Georgia until her health prevented her from attending regularly. However, the memories of attending Belvin A.M.E. Church with her parents, siblings, cousins, and friends reminiscent of back to the horse and buggy days preparing for Homecomings and Revivals each year.  These fond memories remained at the core of her heart.

Mary Alice was educated in the Macon County Public School System.  After graduating from Flint River Farm Schools, she attended Albany State University in Albany, Georgia, and completed her formal education with a Bachelor of Science Degree in Early Childhood Education; she received her lifetime Teacher’s Certification in 1962.

After graduation from college, she began her career as an elementary student teacher in Randolph-Clay and later went to Houston County and was one of the first African Americans to integrate that system under the leadership of Mr. W.F. Ragin at Kings Chapel.  Mrs. Belvin educated students in Dooly County.  Desiring to have a family, she was united in holy matrimony to her high school sweetheart, Oscar L. Belvin.  To this union, they had three children, Keith, Tracy, and Sherri.

While Mary Alice was teaching, Oscar was farming.  Struggling and as a young married couple at that time, they started out living with Oscar’s mother, Mrs. Abbie Belvin where they resided for several years until God blessed them with an opportunity to purchase some land and became entrepreneurs.  In 1977, under the divine inspiration of God, Mary Alice and Oscar combined their resources and talents and began their farming operations, Hog Crawl Creek Farms, Inc. In fact, Mary Alice obtained funds from her teacher retirement to help Oscar purchase about 1500 acres of land; some of the very property in which her life celebration services are being held.  Over the years of farming, they acquired about 3,000 acres and leased an additional 2,000 acres. The Belvin’s were one of the largest black farmers in the State of Georgia.  As a matter of fact, they owed and farmed properties in multiple counties to include Houston, Macon, Dooly, and Sumter Counties.

After retiring from teaching, she became the bookkeeper for the farming operations. Mary Belvin yearning to continue teaching the youth became a permanent substitute teacher at Douglas Frederick High School, Montezuma, GA. She would later be called upon to return to the classroom to work at Thomas’ Proud Childcare Center of Perry, Georgia, where she taught Pre-K children. One of the cherishing things to see from them was a “Happy Plate” This expressed to her that the little ones were full, happy, and still ready to learn.  Her favorite past times included reading, watching television, talking on the phone to neighbors and family, cooking, and writing letters.  She did not believe in texting and felt you should pick up the telephone or correspond in writing. Often, she would sit down and write to her family members and send them cards and notes to let them know she was thinking about them.  Mary Belvin was known for mailing her cousin, Plummy everyone’s obituary, so they could keep up with all of their family and friends who had gone on to glory.

On Saturday, November 7, 2020, God called, and she made her transition and entered God’s eternal care.

Interment will follow at the Belvin AME Churchyard Cemetery.

To send flowers to the family or plant a tree in memory of Mother Mary Alice Johnson Belvin, please visit our floral store.